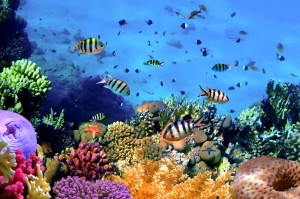 Outer space and the deep blue sea are the two most elusive frontiers we have to explore, and thanks to changing technology, at least one is getting easier for the average Joe.

Over a century ago, photographer William Thompson took the first-ever underwater photograph of a blurry bundle of seaweed in the shallows of south England. Louis Bouton took the first clearly focused photograph nearly forty years later.  Both photographers used well-sealed boxes to execute their shots.  The first true underwater photography device was invented years later by an American photojournalist named Jack Williamson in the early 1900’s, and eventually the technology evolved.  National Geographic published the first underwater color images in 1927.

At this point in time equipment was not only extremely rare, but also bulky and difficult to use. Soon after, Jacques Cousteau and Emile Gagnan, inventors of the aqualung, began developing more user-friendly equipment with other divers. It wasn’t until 1957 when Cousteau teamed up with Belgian inventor Jean de Wouters to create the Calypso 35mm underwater range finder that the future of subaquatic photography was clearly seen.

Throughout the 70’s and 80’s Nat Geo was the go-to source for underwater photography.  For those dwelling inland, these photos were their only source of aquatic visuals apart from vacation snorkeling, trips to the aquarium and the household goldfish.  Today, we live in an era of rapidly expanding accessibility to aquatic photography.

In the last few years we have seen a rise in the production of waterproof point-and-shoot camera’s and housings for DSLR’s, video cameras and even iPhones.  Let’s take a look at several devices that put the possibilities of underwater photography in even the most budget-strapped hands, leaving you no choice but to get out there and start shooting.

The iPhone has had several underwater housings developed for it since its creation in 2007. With the iPhone boasting an 8MP camera with light sensitive tap-to-focus and an f/2.2 aperture, the least one can do is get some cool shots of the kids in the pool. There are several cases on the market worth having a look at, and none of them will set you back more than $110.

Here are a few: 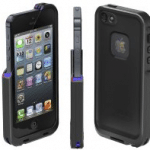 I personally used the Lifeproof case while snorkeling in the Bahamas a couple months back, and it seemed to work well, although the touchscreen can be a tad finicky beneath the plastic cover.

Next we have the GoPro Hero 3. The GoPro isn’t the best option for true photographers, and neither is the iPhone, but it will still get the job done.

Submersible up to 131 feet, this petite camera is great for documenting snorkeling, diving, surfing and anything else you can think of. The GoPro is truly intended for video and offers a resolution of 1080p firing at 30fps. Its stills are somewhat less exciting at 5MP and 3fps, but nevertheless great quality for its convenient size and price. The Hero 3 will set you back $199.99. 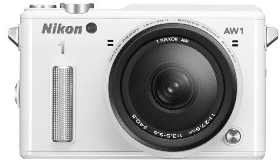 Finally we’ll get into what I think is the future of amateur and professional underwater photography. The Nikon AW1 has only been available for a matter of days, as it was released October 10, 2013. The Nikon 1, the AW1’s predecessor, has been a hot-selling item since its market introduction in 2011 due to its unique design. Being one of the first mirrorless cameras to have transposable lenses, this camera offers tremendous flexibility and convenience. The AW1 takes those elements to the next level by being the “world’s first waterproof, shockproof interchangeable lens camera” ever made. The AW1 has truly come a long way since it was highly inspired by the Calypso and Nikonos cameras developed decades ago.

This camera has some noteworthy tech specs including a 14.2 MP CX Format CMOS sensor, a 73-point phase detection AF in conjunction with a 135-point contrast detection AF, an ISO ranging from 160-6400, underwater distortion and white balance correction, continuous shooting up to 15 fps, a pop-up waterproof flash, and full HD 1080p video. To top it all off, it’s also submersible up to 45 feet.

The camera is compatible with all previous Nikon 1 lenses as well as its own shock and waterproof 1 Nikkor AW 10mm f/2.8 and 11-27.5mm f/3.5-5.6 lenses. Sold with either one lens or both, the Nikon AW1 will set you back between $800-$1000. Being the most fearless compact camera on the market, I can’t wait to read the reviews.

Bring Your Underwater Photography To Life!